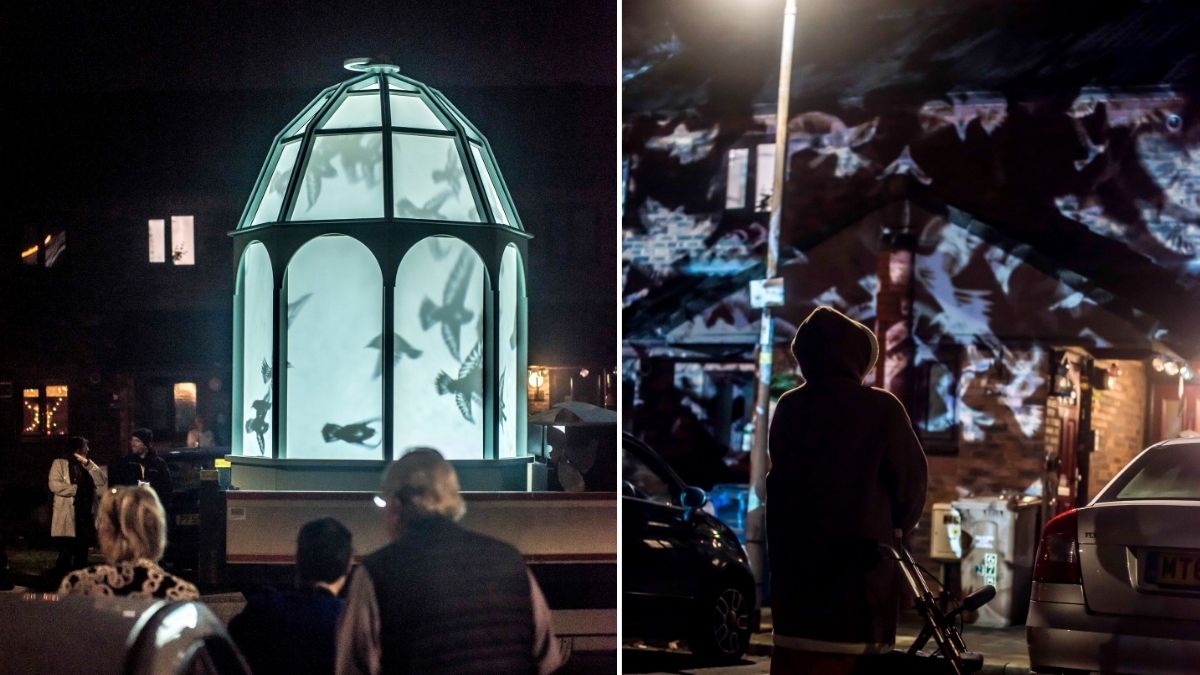 The travelling art installation Mystery Bird has officially landed in our city, bringing a magical story to the people of Salford and Manchester. The tour will take place over the coming days, visiting families and residential homes across the city.

The travelling ’show’ has been created by a collection of artists from the North West whose combined skills in model-making, projection, design, sound, augmented reality and even beatboxing have brought this spectacular piece to life.

The Mystery Bird is a giant birdcage filled with projected birds and accompanied by a bespoke soundscape, which will be released to ‘fly’ across buildings, trees and the streets of Greater Manchester. 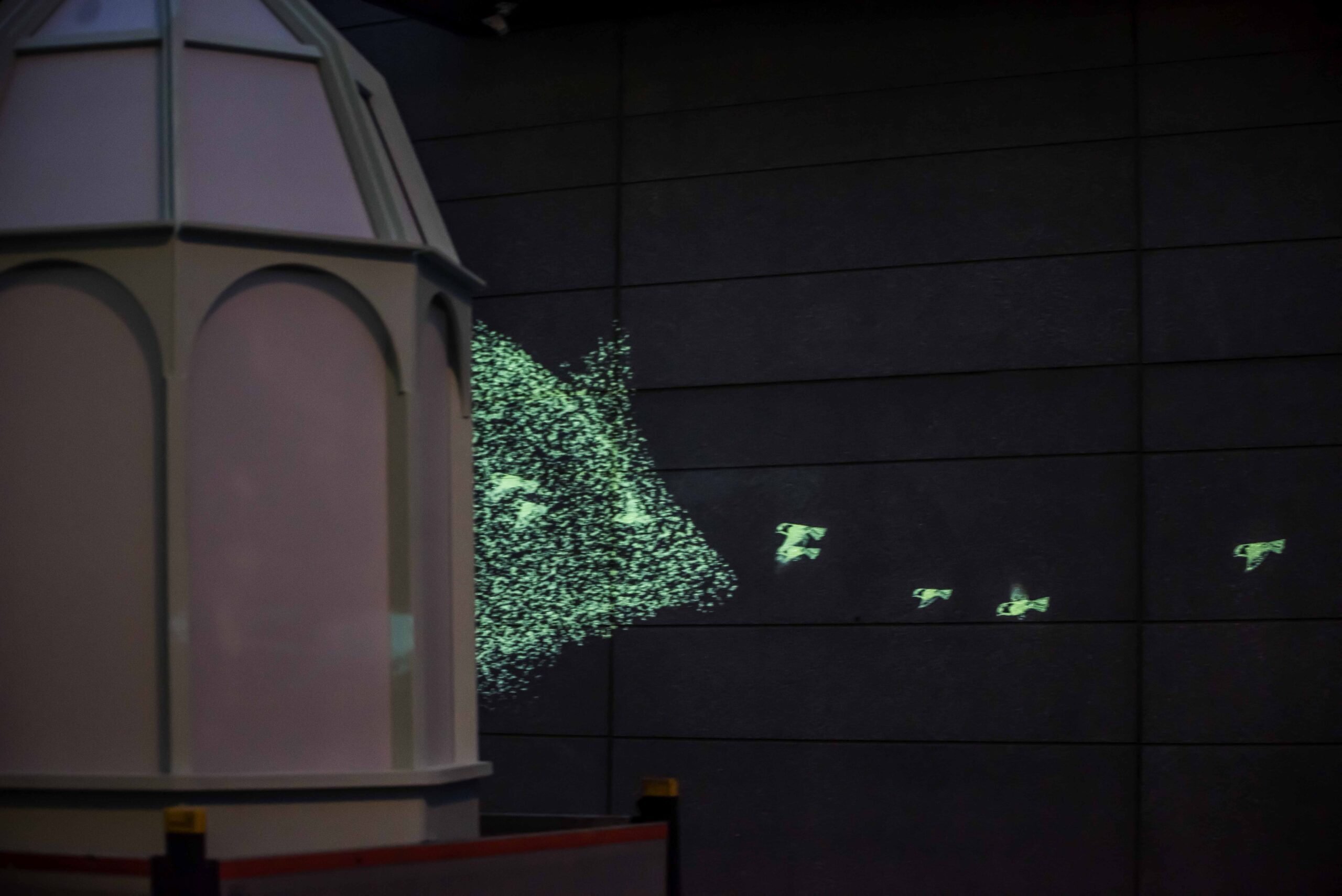 In addition to the Mystery Bird travelling installation, Quays Culture worked with artist Jack Hardiker to create a special free Instagram filter so users can welcome the birds into their own homes and gardens via their mobiles.

Using the filter, Quays Culture are also asking for the public to share a video of their own Mystery Bird experience that will be collated into a community film to share the joy of the experience with the nation.

The idea has taken inspiration from the public’s heightened awareness of nature during the pandemic, offering solace, comfort, motivation and relaxation.

Programme Producer at Quays Culture, and Co-Creator of Mystery Bird, Jude Jagger said of the project: “So many people mentioned enjoying birds, listening to birdsong and getting involved with nature in general during the first lockdown.”

Co-Creator Gemma Saunders added: “Despite Covid-19 being devastating there are some aspects of this situation that have made us re-focus on important factors in our lives. We want to play that back to people and deliver an ‘art at your front door’ wonder that will be truly special.”

Manchester based beatboxer and vocal sculptor Singh is best known for the Tweet Music album, commissioned by the National Trust after research found that listening to bird song before you are twelve makes people calmer and boosts positivity. And indeed, listening to bird song is relaxing, soothing and a re-connect to nature for all age groups.

This latest work features endangered birds on the RSPB list and local birds like the Willow Tit (a regular in Wigan), Grasshopper Warbler, Lapwing, tree Sparrows, Starlings plus ‘saved’ birds like the Peregrine Falcon intertwined by his electronic score, creating the sounds, rhythms and feelings of bird song. This premiere performance will be broadcast from the travelling installation.

“This work celebrates all birds, big and small; birds with personalities, displayers, the gangster birds as I call them – the sparrows; birds that people aren’t familiar with.  I hope my work will connect everyone to the amazing creatures in our life that perhaps we haven’t noted until now,” said Singh. 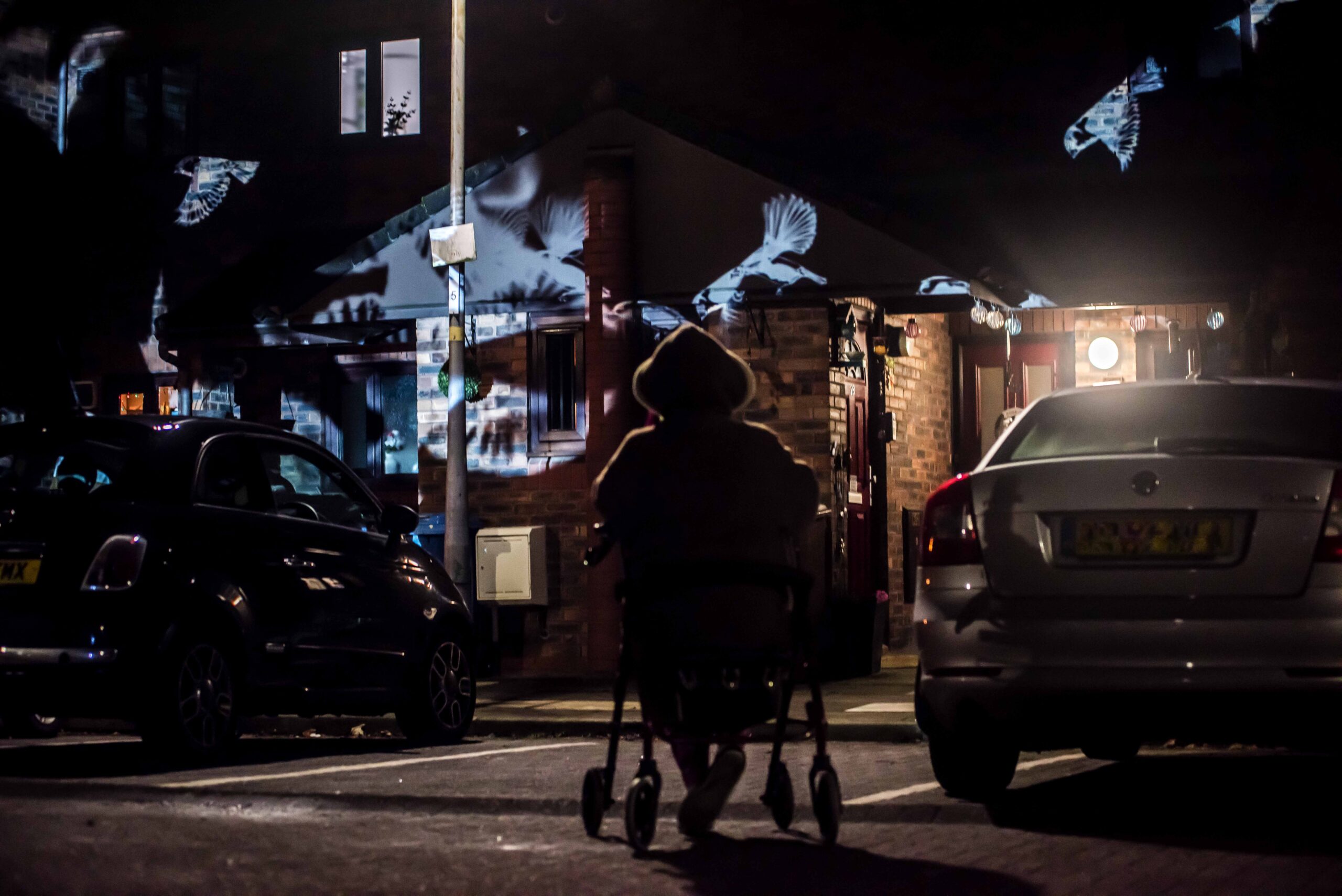 The birds themselves have been created by artist Helen Musselwhite. She said: “I have worked with these six birds, some of whom aren’t commonly known, to show their personality, their lives and their passions. I show the birds in flight, banking, swooping, flying and static. I have ‘lived’ these birds for months and want to share their story. It is the story of us all at present; a feeling of being trapped, unsure, not able to be free – that is the Mystery Bird story.”

Helen worked with animators Illuminos to make the birds ‘come to life’, and Jack Hardiker has produced an Augmented Reality element for the public to interact with.

Rob Vale and Matt Vale, from Illuminos, are tasked with bringing the birds to life. They have spent months studying the six birds to then animate them realistically. 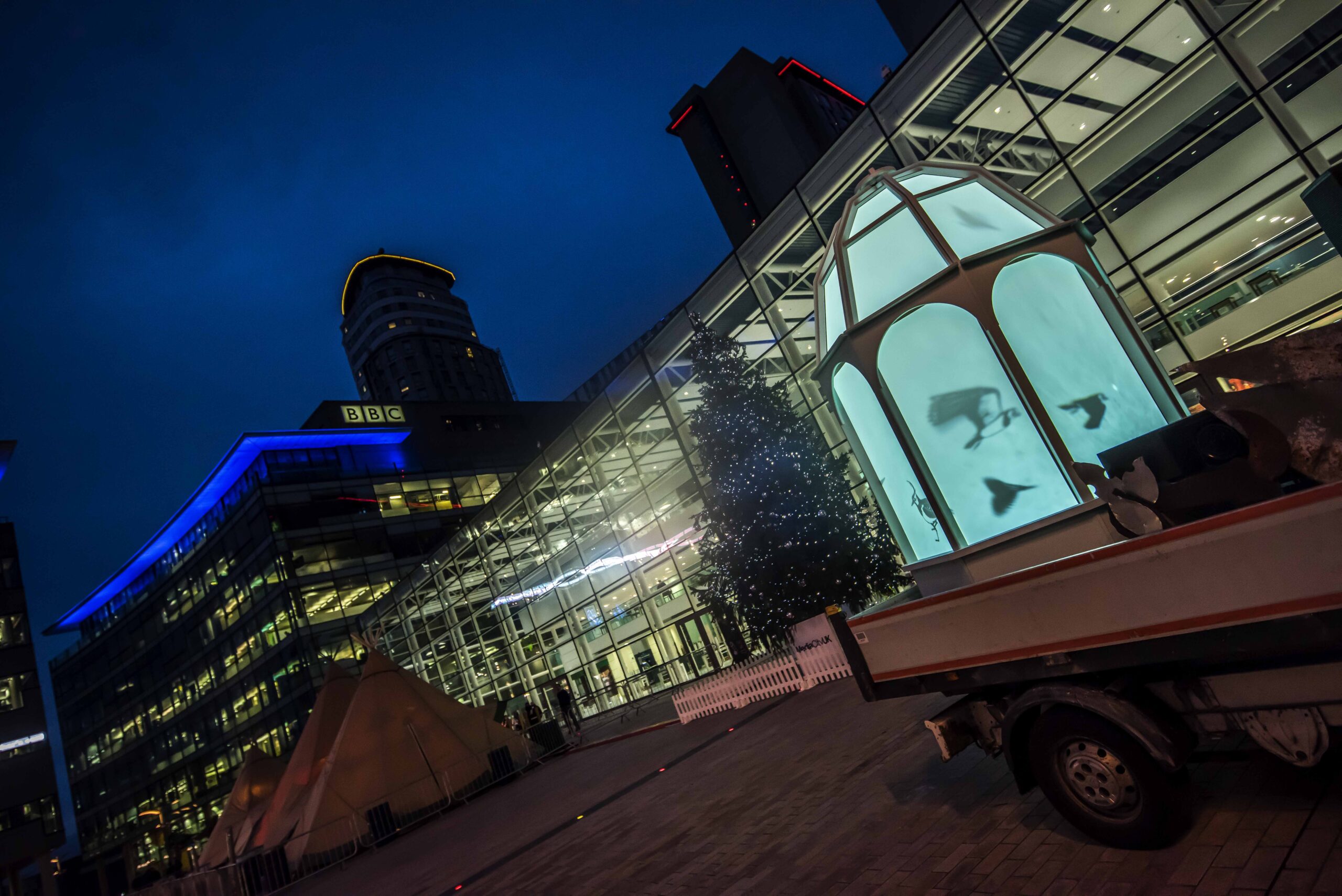 “It has been fascinating to watch the movements of the group as they are so different,” said Illuminos director Rob. “The Willow Tit for example is a nervous jumpy bird. It jumps around and then perches. The Grasshopper Warbler sits with its head down and makes a strange insect noise then leaps straight ahead and starts it’s strange performance over again.”

“The Starlings are so interesting too,” said Matt. “They run and rattle about then hop around. The characters of the birds are so different and it has been incredible to bring them to life.”

The team at Illuminos had the huge challenge of how to present the birds in a cage, fabricated by M3 Industries, with a 360 degree viewing programme whilst travelling on a moving vehicle.

Mystery Bird is on until this Sunday, December 13th, and will be touring neighbourhoods in Salford and Manchester so keep your eyes peeled. 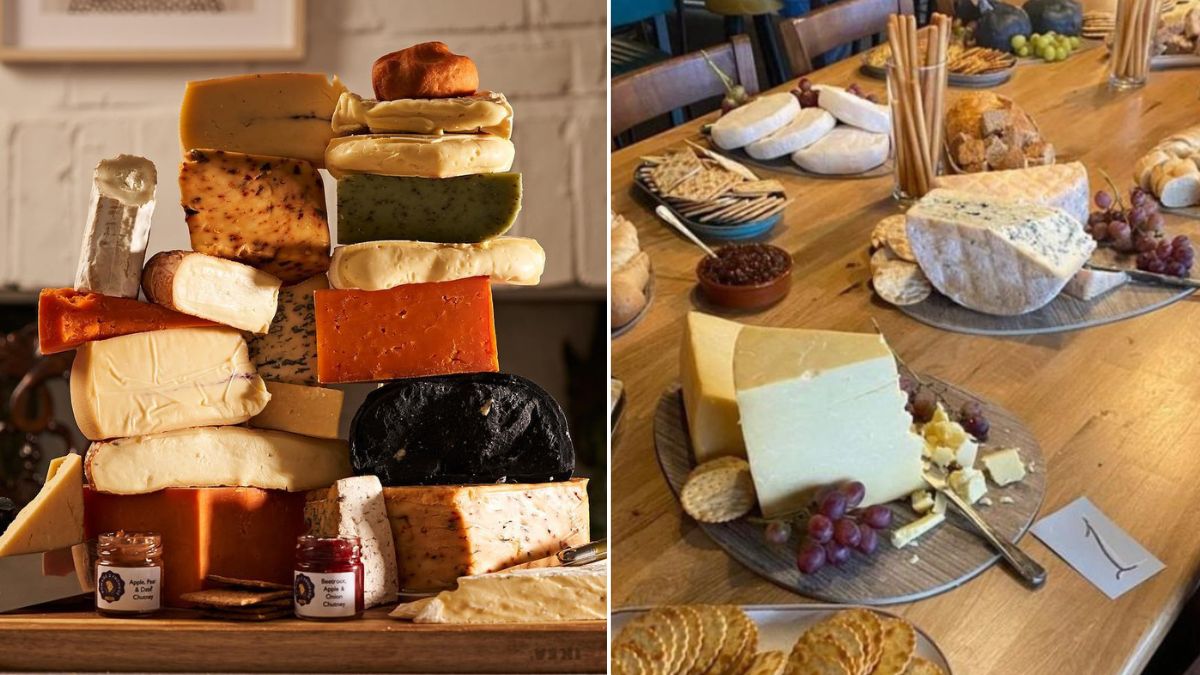 A pub in Manchester is doing an all-you-can-eat cheese party to celebrate Valentine’s Day.

Pie and Ale, based in the Northern Quarter, will be hosting this very cheesy evening in collaboration with Homage 2 Fromage, on Thursday February 16th at 7pm – 9.30pm.

The Leeds-born cheese tasting company will be laying out a selection of cheeses decked out on slabs in a help-yourself buffet style, called ‘Cheese of Love’ – perfect for lovers of the creamy delight.

The event promises to showcase a selection of ‘eight sexy, sultry, sensuous cheeses’ with some ‘soft and yielding’ and others ‘big and strong’, and a serving of the molten good stuff to make an appearance amongst the layout also.

You can have your fill as the portions of cheesy goodness will be unlimited for the two and half hours.

You’ll be needing something to wash it all down with, and at Pie and Ale you can also get stuck into a large selection of ales and craft beers, with six rotating cask ales, craft lager and beer on tap, and plenty of cans and bottles to choose from in the fridge.

Put together by Nick and Vickie, who created Homage 2 Fromage in 2011 after a random conversation on Twitter, the event will be a laid back and casual evening where you can take someone special and indulge in a pungent banquet together while sipping on some good ales.

Tickets cost £40 for a table for two and drinks are not included in the price. You can purchase tickets here.

Biddulph Grange: The unique garden where you can walk through Ancient Egypt, China and Italy in a day

You can explore Ancient Egypt, China and Italy all in one walk. 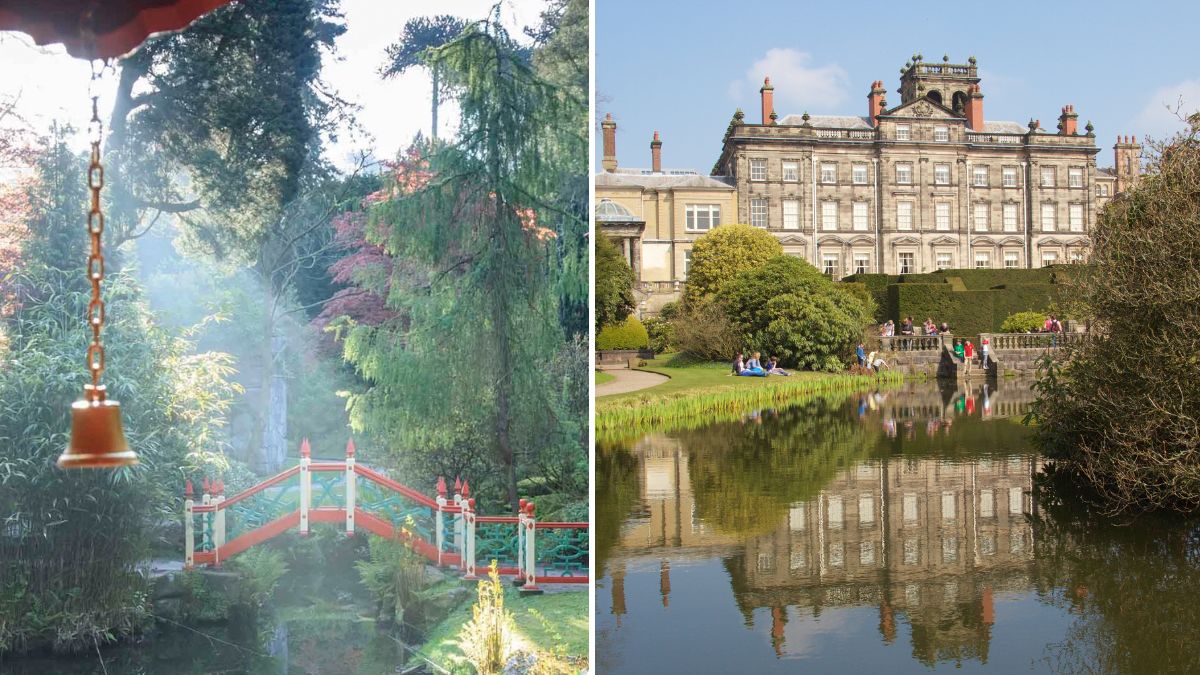 Biddulph Grange is a unique garden where visitors can walk across continents all in one day.

Based at Biddulph Grange Country Park in Staffordshire, this unusual National Trust landscape is a real hidden gem and has even been coined as a ‘horticultural Disneyland’.

Right near the border of Cheshire, the ‘playful paradise’ was designed by horticulturist and British landowner James Bateman after moving there in 1840, and offers a quirky masterpiece for all to enjoy. He lived there with his wife Maria for 27 years, and developed the masterpiece with her help and that of his friend, painter Edward William Cooke.

While exploring the fascinating grounds of the Grade-II listed garden, you can climb its 400 steps, pass by stone sphinxes, before you come across a bright red Chinese pagoda by a lake, and stumble upon a tiered Italian-style garden.

Walkers can take a step back in time — or all 400 of them — through a Tudor-style cottage and a Victorian garden, which overlooks the valley. Featured gardens include:

Bright reds and trimmings of gold make this little piece of an oriental haven stand out from the crowd. It even has a joss house, a tower and a ‘Great wall’ all of its own.

Walk through a tomb-like tunnel where a grand stone temple doorway bears an image of the sun god Ra along with four stone sphinxes, surrounded by clipped yew.

It features a series of magnificent trickling terraces, one after the other, in an Italian style.

The incredible terraces are packed with plants from around the world – it might be Italian in style, but Italian plants apparently don’t grow well on a wet and windy English hillside.

Here is where old tree stumps are used as makeshift scaffolding for climbing plants and is the oldest stumpery in the country. It has even been copied by Prince Charles’ home in Gloucestershire.

This Tudor-style cottage dates back to 1856 and its facade includes the initials of James and his wife Maria.

The National Trust has drawn possible links between the Cheshire Cottage and Queen Victoria’s famous Swiss Cottage, which she built for her nine children around the same time.

In Bateman’s time, the cottage would have been the commanding focus surrounded by small trees – now it’s dwarfed by towering conifers.

More than just acres of stunning garden grounds, Biddulph Grange also has a Geological gallery, with a ‘unique Victorian display of fossils and geological strata laid out according to the Biblical days of creation’ — offering a ‘fascinating journey through time’.

There is also a woodland adventure play area, with see-saws, climbing frames and balancing beams — great for the young ones with plenty of energy to burn. Afterwards, you can wind down and take it all in at the tea rooms, where hot and cold food is served fresh daily.

Biddulph Grange is open from 10am to 3.30pm, Saturday to Wednesday, throughout January. Tickets for adults cost £12 and £6 for children.

It’s between 45 minutes and an hour to drive to Biddulph Grange Garden from most parts of Greater Manchester. You can also get to it by taking the train to Congleton then a short bus ride on the 94 service to St Lawrence’s Church.

You can find out more about Biddulph Grange Garden at the National Trust website here.

The kids will love this! 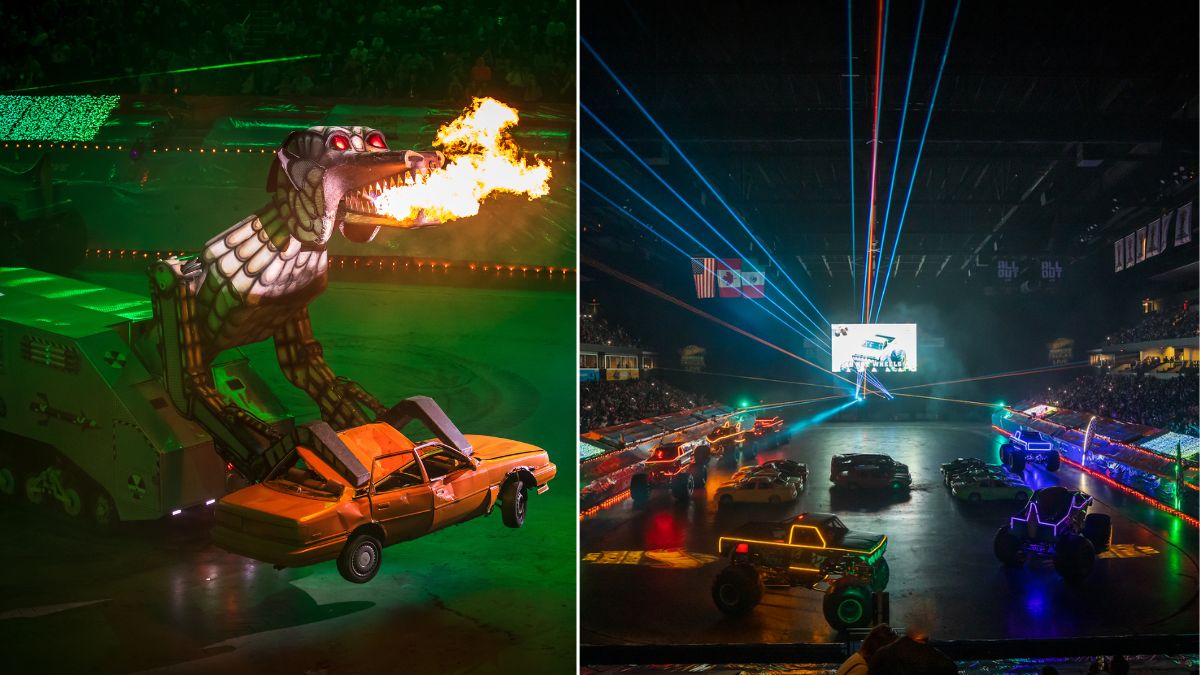 The all-new Hot Wheels Monster Trucks Live Glow Party will be coming to Manchester this weekend.

Fans of all ages will be left dazzled at the family friendly event, as they watch the iconic trucks light up the floor, which showcases at the AO Arena on Saturday 14th and Sunday 15th.

The thrilling new experience brings audiences the only opportunity to watch their favourite Hot Wheels Monster Trucks – Mega Wrex™, Tiger Shark™, Boneshaker™, Bigfoot® and more, plus the all-new Gunkster™, as they light-up the room.

Plus, a special appearance from the car-eating, fire-breathing transforming robot, Megasaurus, and the electrifying high-flyers of Hot Wheels Monster Trucks Live, Freestyle Motocross.

An exciting Crash Zone Pre-Show Party will be held before every performance, providing fans access to the competition floor to see the outrageous designs and epic size of Monster Trucks along with autograph signings from the drivers and performers.

Each ticket includes an autograph card plus a souvenir pass and lanyard exclusive to Crash Zone attendees.

“As the world’s largest live-entertainment company, we are part of many incredible shows, but Hot Wheels Monster Trucks Live provides a new dimension in family entertainment that never fails to impress.

“We can’t wait for these shows so we can all join the Glow Party.”

Ken Hudgens, CEO of Family Entertainment Live, added: “With the success of the Hot Wheels Monster Trucks Live Glow Party thus far, we’re excited to continue the amazing experience into 2023, both in the United States and internationally.”

Special children’s pricing is available for all shows providing great value for the whole family.