From haunted mansions to seriously creepy hospitals there’s plenty of ghostly things you can do this weekend to get in the spooky spirit – all from a nice social distance!

Head down for some spooky sights… if you’re brave enough…

Ordsall Hall
Salford’s 750-year-old manor house is home to more than just dusty old furniture… Ordsall Hall dates as far back as 750 years ago and is known as the alleged site where Guy Fawkes helped devise The Gunpowder Plot – the street beside it is even named after him.

You know those places that give you the creeps even just being near them but you don’t even know why? Ordsall Hall fits that criteria exactly. I mean, the fact you can watch a live GhostCam and have a creepy sleepover with whatever lurks in the shadows overnight certainly adds to its chill…

The most-reported place for paranormal activity seems to come from the Star Chamber, where it’s said that voices of small children are often heard. To add to these spooky voices, visitors often comment on strange sightings followed by shivers and cold drafts from nowhere and what appears to be ghostly hands on shoulders.

One visitor even noted that the atmosphere changed in the room, becoming violently oppressive and
feeling a sudden and intimidating presence. Members of staff at Ordsall Hall are usually quite accommodating of the ghosts – you wouldn’t work there otherwise, surely? One staff member though, when opening up for the day, knew that the building was empty but could hear her name being called from across the gallery. 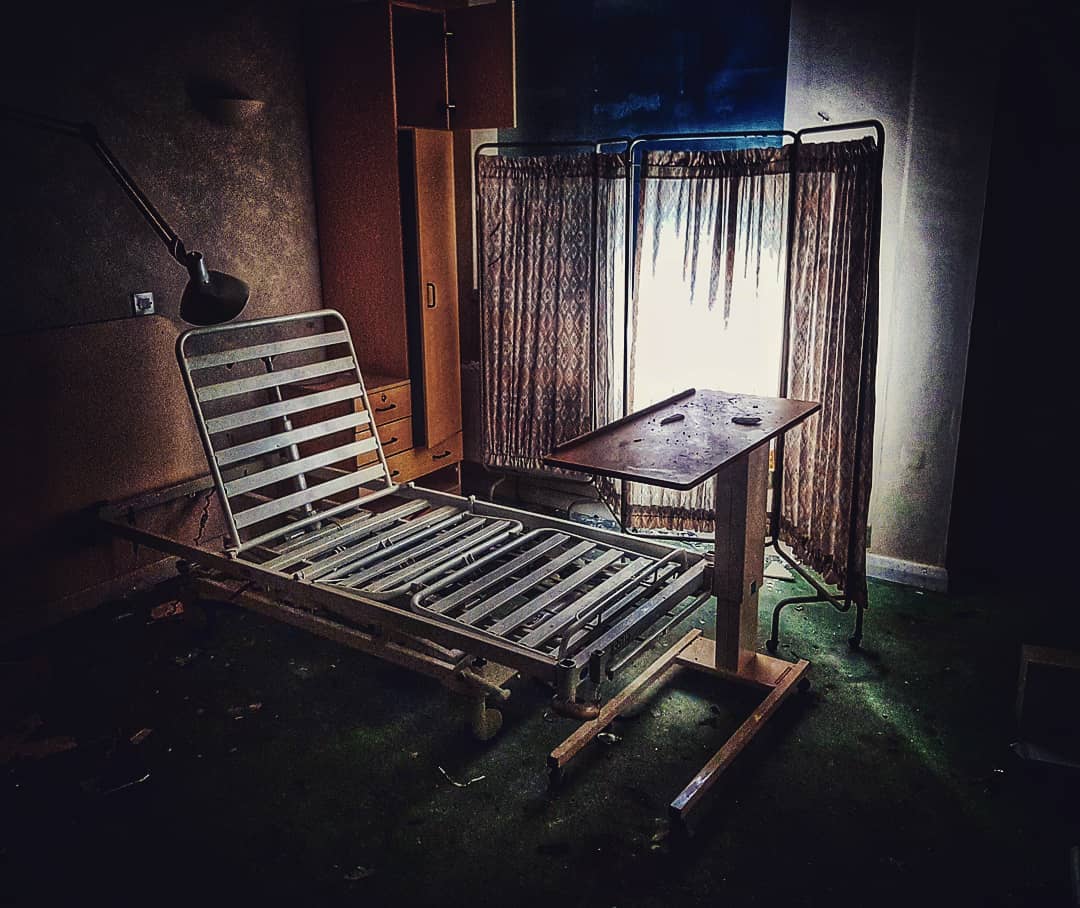 Stretford’s Abandoned Hospital
The Stretford Memorial Hospital closed in 2015, but they left almost everything behind…

Now, the hospital itself was built all the way back in 1850 as a private residence known as Basford House. It was designed in an Italianate style meaning it sort of resembles an Italian Renaissance building, but a bit more modern.

Well, that’s as simple as I can make it – if you really want to know what ‘Italianate’ style means in terms of architecture – feel free to spend around 2 years of your life doing your own research. It doesn’t really matter what architectural style it has really, all you need to know is that it started out as a private residence and was then lent to the British Red Cross as an auxiliary hospital during the First World War.

It was then converted into a maternity hospital in 1925, and one of the Bee Gee’s was even born here in 1958!

This dark forest, which dates as far back as the Bronze Age, is riddled with spiritual history, witchy tales and a creature that cackles in your dreams. Tucked away in the thick lining of trees, rustling foliage and slippery muddy gulleys of Hole Clough is a child-eating monster. A Boggart.

It’s pretty common knowledge that Boggarts don’t like dogs at all, so don’t be surprised if your four-legged friend starts snarling at seemingly nothing in Hole Clough. It’s just a terrifying boggart. This Boggart inhabits the old farmhouse which was crumbling away in the woods, after scaring away the farmer and his family way back when.

But you can often find Boggarts in muddy holes, sharp bends and in bushes if you ever want to go hunting for one. Boggarts even have a terrifying and creepy affinity for children, in particular babies, and there have been many cases of missing children since the 18th century at Boggart Hole Clough.

Barnes Hospital
Barnes Hospital, a stunning Grade-II listed building in Cheadle, has now been transformed into flats – but you might not be the only thing that lives there…

Built in the 1870s by Robert Barnes, the hospital was designed to help the then thousands of factory workers in Manchester who worked and lived in dangerous and filthy environments. Obviously, it’s haunted. It’s an old abandoned hospital.

One individual reported that he saw a nurse, clear as day, doing her rounds of the patients. Only there were no patients, no beds and the tune she was whispering echoed deafeningly around the entire building. 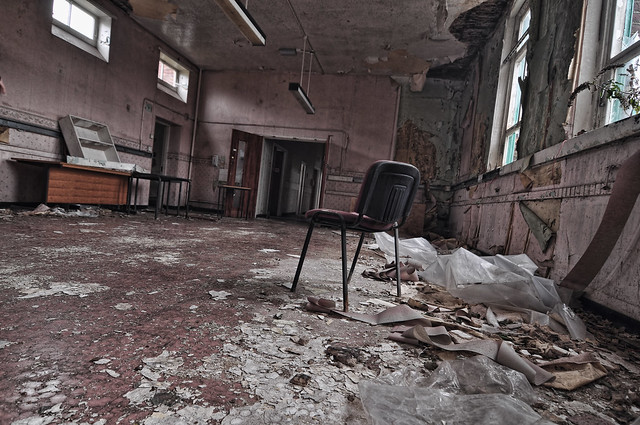 This building has got some serious paranormal activity going on. Once a hospital caring for thousands of psychiatric patients, St Thomas’ Hospital was previously a workhouse home to 700 inmates, working in conditions described as totally ‘brutal and chaotic’.

Those who have bravely ventured in have run away screaming from the horrors they have seen or heard. From footsteps – even when there are no stairs to the second floor – to floating doctors complete with a white coat and white face mask.

If you think you’re brave enough for a look around, apparently the mortuary is filled with the most paranormal activity due to a patient who was cut open whilst he was still alive.

Morrisons will now no longer allow shoppers in stores without a mask unless they’re medically exempt.

The supermarket Morrisons has now confirmed that customers who refuse to wear a mask will be told to leave the store unless they can provide a medical exemption.

Chief executive David Potts said: “Those who are offered a face covering and decline to wear one won’t be allowed to shop at Morrisons unless they are medically exempt. Our store colleagues are working hard to feed you and your family, please be kind.”

This comes after shopworkers’ union USDAW said it was ‘inundated’ with complaints from members who were ‘deeply concerned’ for their safety, as the public often ignore Covid rules.

England’s chief medical officer said earlier that the next few weeks will be the worst of the pandemic, pleading with the public to minimise the amount of unnecessary contact with people not in their household.

Speaking to BBC Breakfast, Chris Whitty added: “This new variant is really pushing things in a way that the old variant, which was already very bad, was not able to. So we have a very significant problem … The next few weeks are going to be the worst weeks of this pandemic in terms of numbers into the NHS.”

Vaccines minister Nadhim Zahawi also voiced his concerns that the public were not complying with the measures put in place by supermarkets. He said: “I am worried about supermarkets and people actually wearing masks and following the one-way system and making sure when it’s at capacity they wait outside the supermarket.”

The Union of Shop, Distributive and Allied Workers (USDAW) general secretary, Paddy Lillis said: “Retail staff are working with the public every day and not only suffer increased abuse, but are deeply worried about catching Covid-19.

“Where safety measures are agreed, retailers need to make sure that they are being followed consistently, in every store. We are also very concerned by reports that too many customers are not following necessary safety measures like social distancing, wearing a face covering and only shopping for essential items.”

New tighter rules are also now reportedly being considered by the government, six days after the national lockdown was implemented.

The Telegraph reports that a ban on households mixing is being considered by ministers as well as the possible introduction of face coverings in offices, as some businesses have apparently become ‘lax’.

Poundland’s festive till alerts have been dubbed ‘humiliating’ by some customers.

Not everybody is impressed with new till alert at Poundland that put a festive twist on the automated voice.

Santa replaces the normal voice at the self-serve tills this Christmas, however one shopper was left mortified after her card was rejected and Santa started singing.

A video of the festive alert has gone viral with many criticising it as Father Christmas can be heard warning: “Card not accepted, is it on the naughty list?

“Because I’m checking it twice, I’m going to find out who’s naughty or nice,” before singing: “Santa Claus is coming to town.”

One woman complained on Twitter writing: “Your tills are incredibly embarrassing!! Shouting out my card was declined over and over. How discreet for your customers. Not.

“All because I needed to transfer my money to the correct account, the whole shop thought I couldn’t purchase.

“Not happy one bit. Merry Xmas.”

A video has been shared on TikTok racking up over 150,000 veiws. The caption read: “So guys, I accidentally used the wrong card so it got declined – listen to this self checkout machine.

A person replied saying: “This happened to me yesterday! The most embarrassing thing ever.”

A fed up employee replied: “I work at Poundland and this haunts me.”

On Twitter, one man tweeted: “Bizarrely, Poundland has turned its self-service till voice into Santa.

“Just stood behind a queue of people buying binbags, cotton buds, weedkiller with Santa joyfully proclaiming, ‘Ho ho ho, make sure you get those wrapped nicely for Christmas!’ every time.”

A second added: “Shopping in @Poundland and hearing Santa’s voice on the self serve tills was the cheer up I didn’t know I needed today.”

A Poundland spokesman told The Mirror: “Santa took time out of his very busy schedule to do this. How can anyone be a grinch about Santa?

“Our seasonal checkout voices from Elvis to Yoda are part of what makes Poundland, Poundland. We haven’t lost our sense of humour despite this being an unusual year.”

Sainsbury’s has announced plans to open on Boxing Day despite union bosses urging the supermarket to give staff a break.

The supermarket has come under fire following its decision to open between 10am and 5pm on December 26th.

Representatives at Unite accused the company of ‘putting wealth before the wellbeing of its workforce’ after one of the toughest years on record for the supermarket staff.

The union has described the chain as ‘acting like Scrooge’ following the decision.

The union is calling on the supermarket to close on Boxing Day so staff can enjoy ‘a well earned break’  after working in ‘difficult conditions throughout the pandemic’.

They are also calling for measures to help staff get home safely after midnight when public transport might be limited.

The supermarket has agreed to reduce its opening hours but supermarkets will be open from 6am to midnight from December 21st to December 23rd.

Unite national officer Bev Clarkson said: “In A Christmas Carol, Scrooge begrudgingly gives Bob Cratchit Christmas Day off but demands he be in on Boxing Day.

“By refusing to give their workforce – many of whom, like Bob Cratchit, will have worked until late Christmas Eve – a well-earned break on Boxing Day, Sainsbury’s are acting like Scrooge.

“Putting wealth before the wellbeing of its workforce certainly doesn’t chime with Sainsbury’s warm-hearted Christmas ads currently running on TV.”

Clarkson added: “Scrooge learns that some things are more important than the pursuit of riches; Sainsbury’s, who have made lots of money this year, should follow suit and give staff a well-earned break with their families.

“They should also put in place measures to ensure staff working until after midnight in the run up to Christmas can get home safely.”

“Sainsbury’s should embrace the Christmas spirit by recognising their staff have worked hard throughout the pandemic, on top of working extra hours over the festive period, and give them Boxing Day off.”

Sainsbury’s released a statement that read: “Our colleagues do a fantastic job and have worked incredibly hard this year,”

“We are doing everything we can to give our colleagues Boxing Day off where they have asked for it and we will be reducing our opening hours for Boxing Day from 10am to 5pm for all our Sainsbury’s supermarkets and Argos stores.

“This will allow all our colleagues to spend a little more time with their families, which we know is important to them, while enabling our customers to shop for the items they may need during the festive period.”