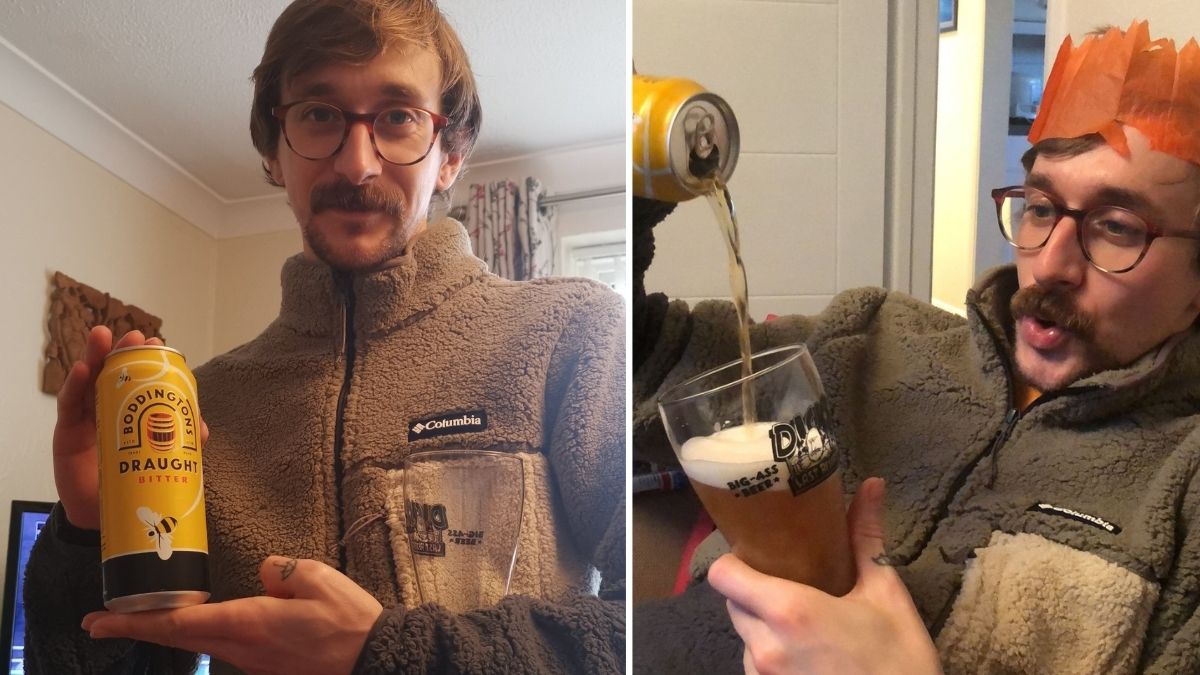 A man provided the nation with some much-needed entertainment on Boxing Day by setting himself the challenge to drink fifteen cans of Boddingtons bitter.

And, miraculously, he completely smashed it and became an internet sensation in the process.

Stand-up comedian – or hero to some – Rob Copland took to Twitter on the 26th to announce that he had challenged himself to beat his own personal best of twelve cans of Boddingtons by downing fifteen cans throughout the day.

Rob cracked open his first can at 2:25pm, noting that he was feeling both ‘confident’ and ‘thirsty’ – helpful when you have fifteen cans of Manchester’s finest bitter staring at you from the fridge, I suppose.

Less than ten minutes later, Rob announced to his eager followers that he had already got stuck into his second can, noting: “Anything is possible at this stage. Not sure I can keep up this pace. I have until midnight.”

But he defied his own doubts by powering through the afternoon at an admirable pace, reaching his sixth can of Boddies just two hours later at 4:18pm.

Rob gave a comic commentary of his state with each can consumed, with him declaring that his sixth Boddingtons made him ‘want to go to a nightclub full of people drinking exclusively Boddingtons’ with ‘DJs just playing radio commentary of the footy.’

The seventh, eighth and ninth cans all came and went within the next hour, with Rob becoming noticeably more merry with each update.

He also took the time to give a little shout out to Boxing Day throughout the festivities, writing: “Everyone’s mental on Xmas day, everything has to be perfect, everyone’s a bit tense, boxing day is where its at… It’s just football and Boddingtons….”.

He has a point, to be honest.

At 6:32pm, Rob had cracked open his tenth pint (with the help from his dad Alan), who he admitted hadn’t expected to feature so heavily in the challenge. With all the bitter clearly going to his head, he wrote: “Couldn’t have done it with out him, cheers Alan. I’m pretty p***** now tbh.”

By 7:46pm, however, Rob seemed to have hit his wall, with him informing his followers: “Guys Jim [drunken for I’m] feeling really p***** now. Need some genuine words of encouragement.”

Yet despite his struggles, Rob powered on and at 9:58pm – nearly eight hours on from his first can – Rob was poured his fifteenth Boddingtons of the day (with a little help from Alan, of course).

To mark the monumental occasion, his brother filmed the final pour, with Rob himself dishing out a little inspiration, writing: “I guarantee it feels like an anti climax, but what did you want?? I didn’t expect it to get this popular…. The real result is we are all capable of anything [sic] Be kind to yourselves be kind to each other!”

Rob’s thread – which accumulated tens of thousands of likes and reactions throughout the day – was followed up the next morning with the only appropriate tweet: “Oh boy… Best hangover cures anyone??”

And you thought you drank a lot over Christmas…