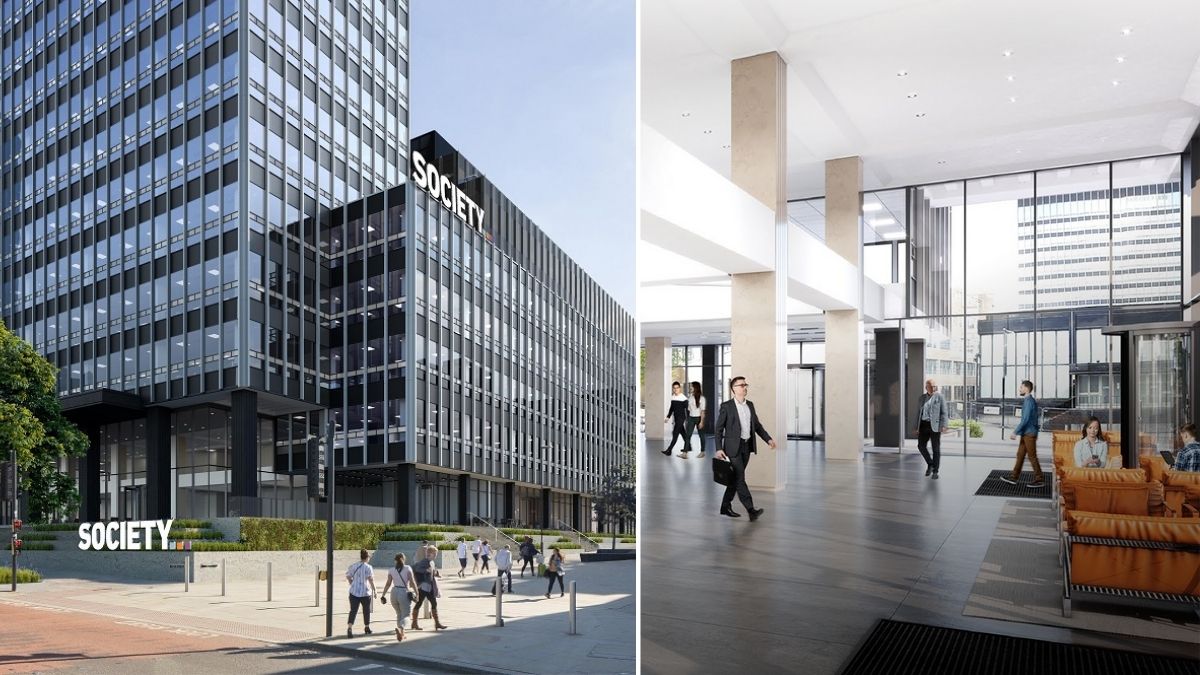 The former CIS skyscraper will be getting a whole new lease of life thanks to a massive £150M refurbishment project.

The project, commissioned by Castlebrooke Investments, will be transforming the building – which was once the tallest tower in Manchester before the arrival of the Beetham Tower back in 2006 –  into Society, a new ‘vertical district’ complete with restaurants, bars and shared workspaces.

Society will offer ‘all the facilities of a HQ environment with flexible workspaces, meeting rooms, conference suites and the convenience of on-site amenities’, according to Castlebrooke. 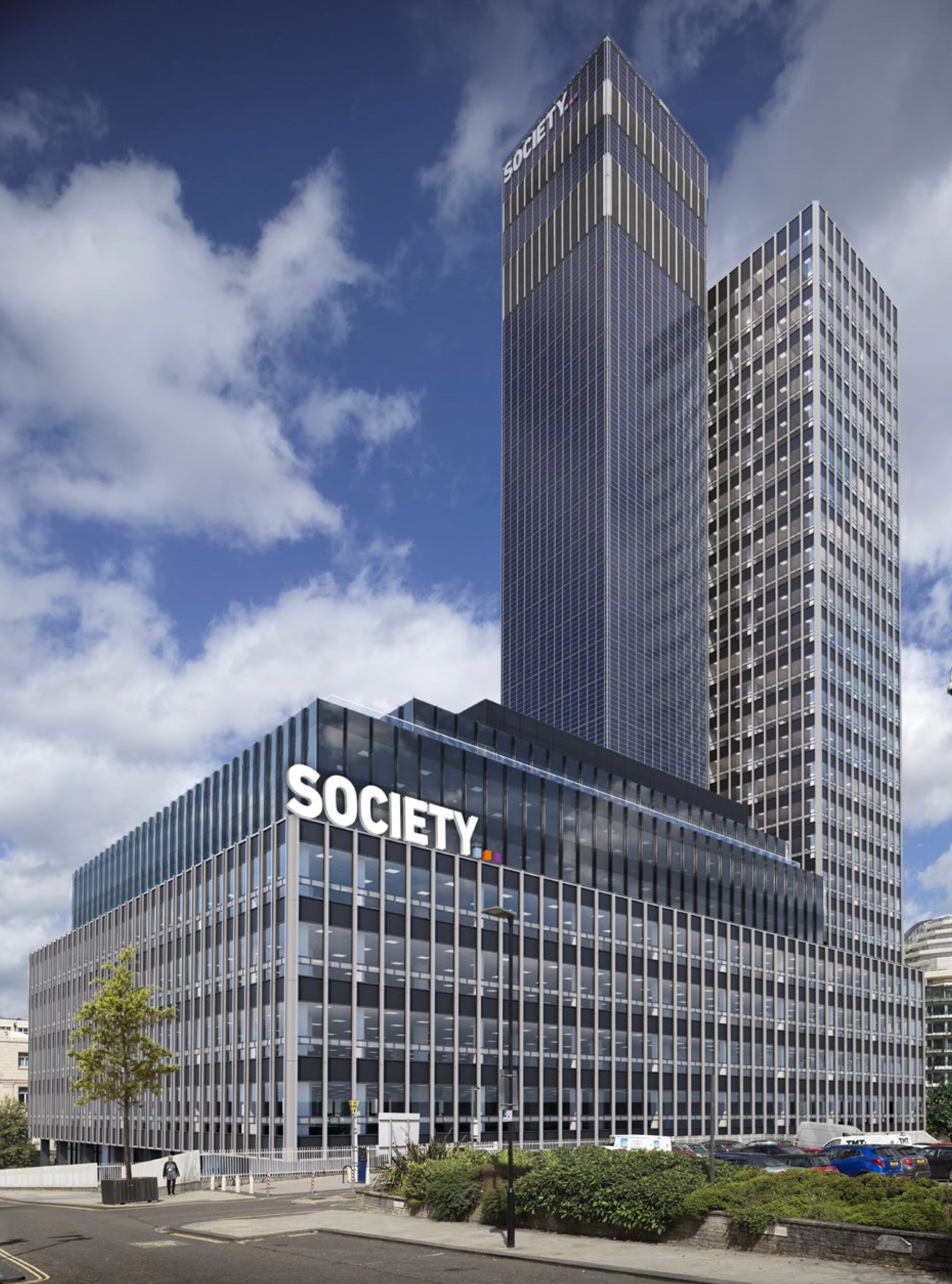 The 425,000 sq ft building will be sectioned into three distinct parts; the Tower, which will feature 143,527 sq ft of workspace across twenty-six floors, the Podium, 207,379 sq ft of the ‘largest and most flexible office floor plates in Manchester’ and the Street, a space for food, drink, retail and leisure amenities at street level.

A spokesperson from Castlebrooke said: “The tower has been at the forefront of innovation in Manchester city centre since it was first erected in the 1960s.

“Our redevelopment strategy continues this forward-thinking tradition, re-imagining the building to form a vertical district that will attract distinct user types to its three component parts – tower, podium, and street – as the way we work and live in the city evolves.

“Together these components facilitate the coming together of a new society, offering all the facilities of a HQ environment with flexible workspaces, meeting rooms, conference suites and the convenience of on-site amenities, which are ideal for Manchester’s international business community.”

Sir Richard Leese, leader of Manchester City Council, added: “Society complements the established neighbourhood of vibrant communities in this part of the city and marks an exciting new era for the building and a creative re-imagining of an established working environment, which Manchester’s business community will no doubt embrace.”

The plans for Society are still in their early stages so a finish date is yet to be announced – but you can stay posted with updates over on their website.

The interior designs for these luxury homes were inspired by the hit Netflix show, The Queen’s Gambit. 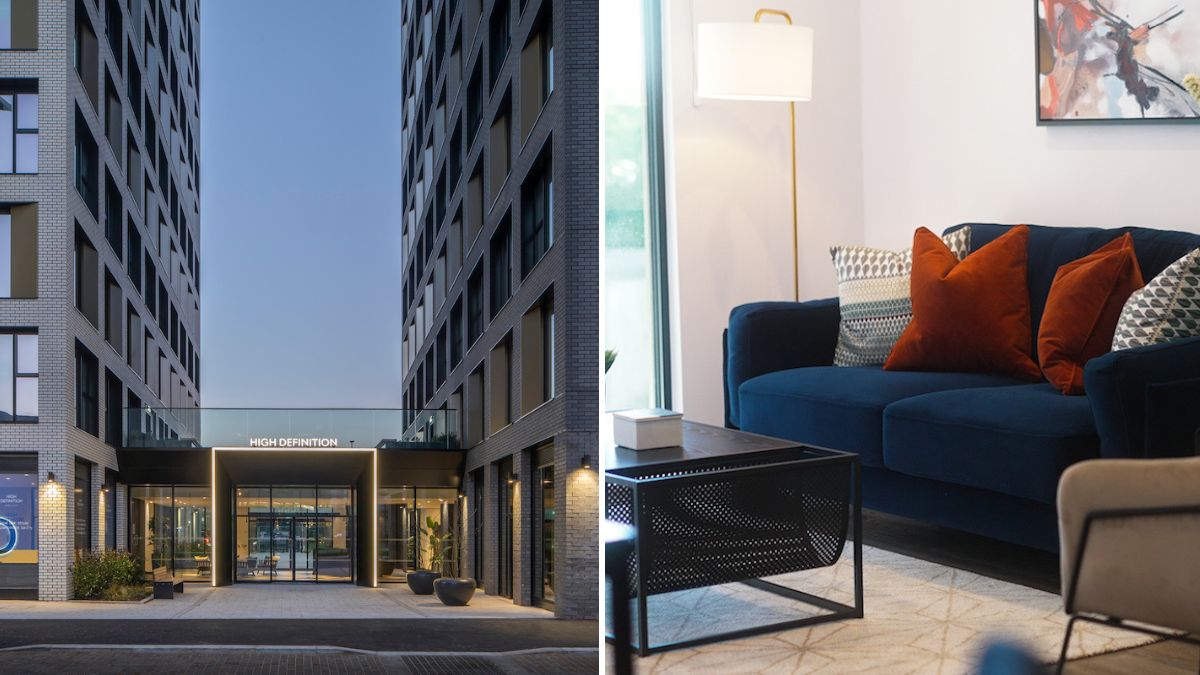 The MediaCity High Definition apartments by Latimer are now ready to buy.

Surprisingly affordable, homebuyers could snatch one of these glossy new apartments for less than 60k thanks to a shared ownership scheme.

Prices start from as little as £57,450 (based on a 30% share of £191,500) for a one bedroom apartment under shared ownership, so getting your foot on the property ladder might be more attainable than you thought.

Latimer, the development arm of Clarion Housing Group, has announced the handover of the first apartment block at its flagship £70m HD development in MediaCity, and the first residents have already started moving in.

A total of 100 apartments of the 280 will be available through Latimer’s shared ownership offering.

A shared ownership mortgage will allow people to part buy, part rent one of these properties while increasing their share of ownership over time until they own their property outright.

Some of the unique features for residents to take advantage of include modern and spacious communal areas such as a Club HD terrace lounge, co-working spaces and a multi-function private room – suitable for professionals on their working from home days.

There’s also a 24-hour concierge and audio door entry systems for high-spec security. And if that’s not enough to sway you, the interiors are inspired by the hit Netflix show, The Queen’s Gambit.

The communal area is decked out with comfy beanbags, curved retro sofas, leather reclining chairs, stools shaped like giant chess pieces and wooden tables with their own built-in wine bottle holders. And there’s a cocktail bar complete with wine fridge, as well as pool and table tennis tables.

Paul Walker, National Sales Director at Clarion Housing Group, said: “It’s fantastic to reach another key moment in the life of our exciting High Definition development as we see the first residents make it their home.”

“Straight away, they will be able to get the full High Definition experience, with access to the luxurious residents’ lounge and high spec co-working spaces, which will make the development feel more than just a home, but a vibrant community,” he added.

A Second residential block at HD, Aria, is scheduled to handover in February next year.

You can find out more HERE. 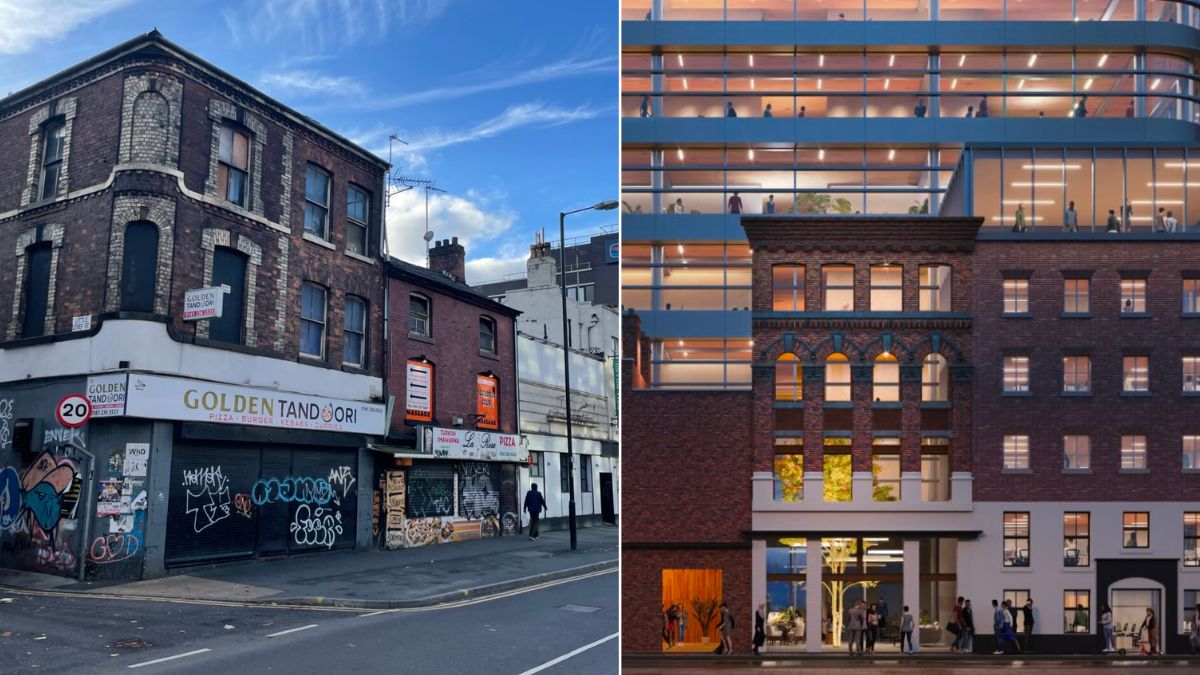 New life could soon be injected into two derelict buildings in the Northern Quarter thanks to an upcoming public consultation.

Real estate developer Soller Group is holding the consultation on Wednesday November 2nd for its city-centre development proposals, where it will invite members of the public to comment on its plans to develop a prominent site on the corner of Lever Street and Great Ancoats Street.

The proposed heritage-led scheme aims to transform the existing site into a brand-new c.100,000 sq ft office led mixed-use development through a combination of sensitive retention and restoration of historic buildings, and the addition of a contemporary new building set back from Lever Street. 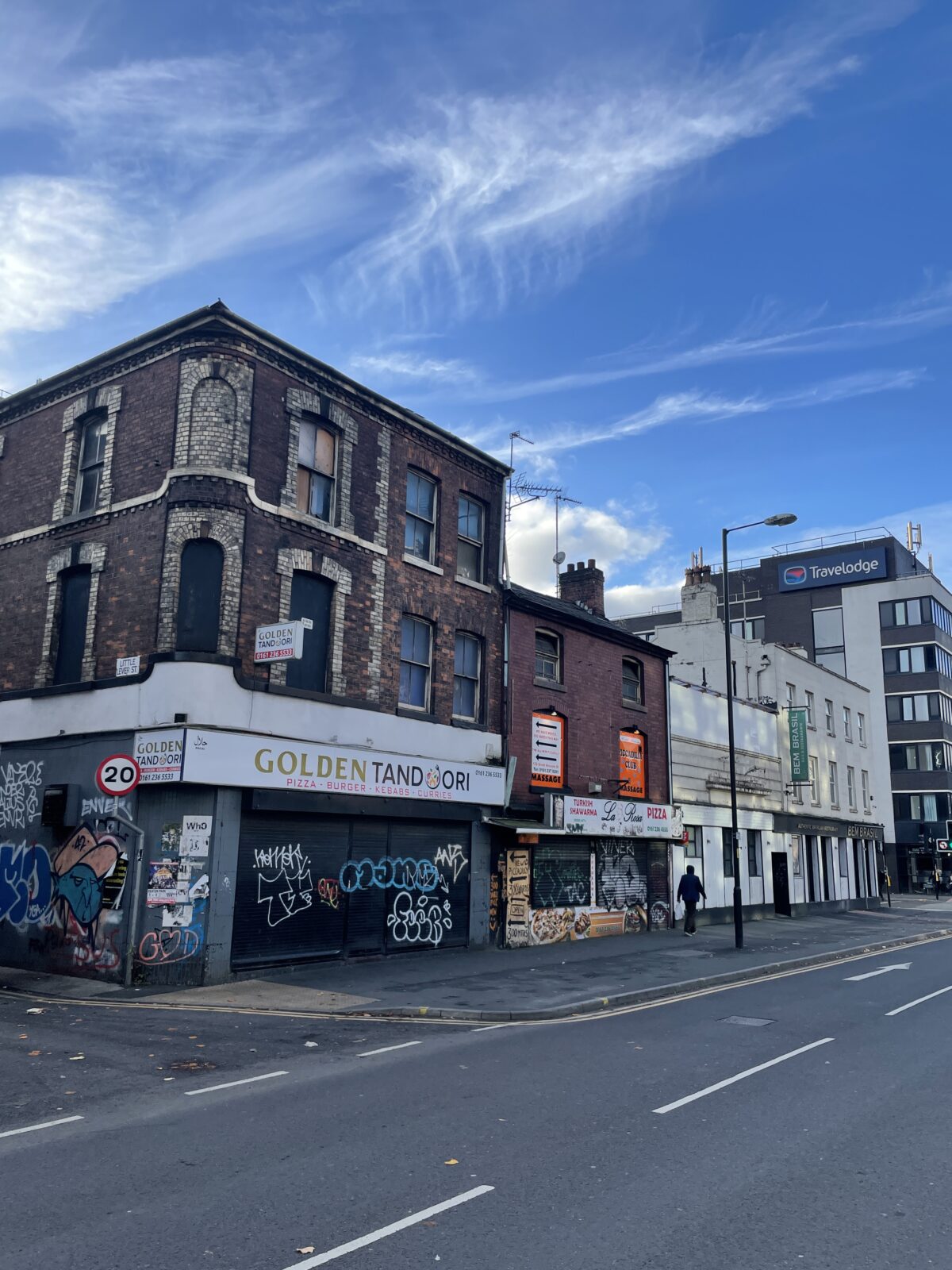 The developer is hoping to create a community hub, restaurant and bar offering in the restored ground floor buildings, and offices above designed to cater for creative businesses as they grow in the NQ. Currently as creative companies expand they are being forced out of the NQ due to a lack of modern office space.

Designed by Glenn Howells Architects, the scheme also hopes to promote economic benefits, including the potential to generate 800 direct jobs in the city and a predicted annual GVA contribution of £60m to the Greater Manchester economy.

Following the public consultation and review of feedback, it is hoped a planning application will be submitted in early Spring 2023.

Soller’s CEO Nick Treadaway said: “We’re very much looking forward to meeting with the general public and listening to their views on our proposals. 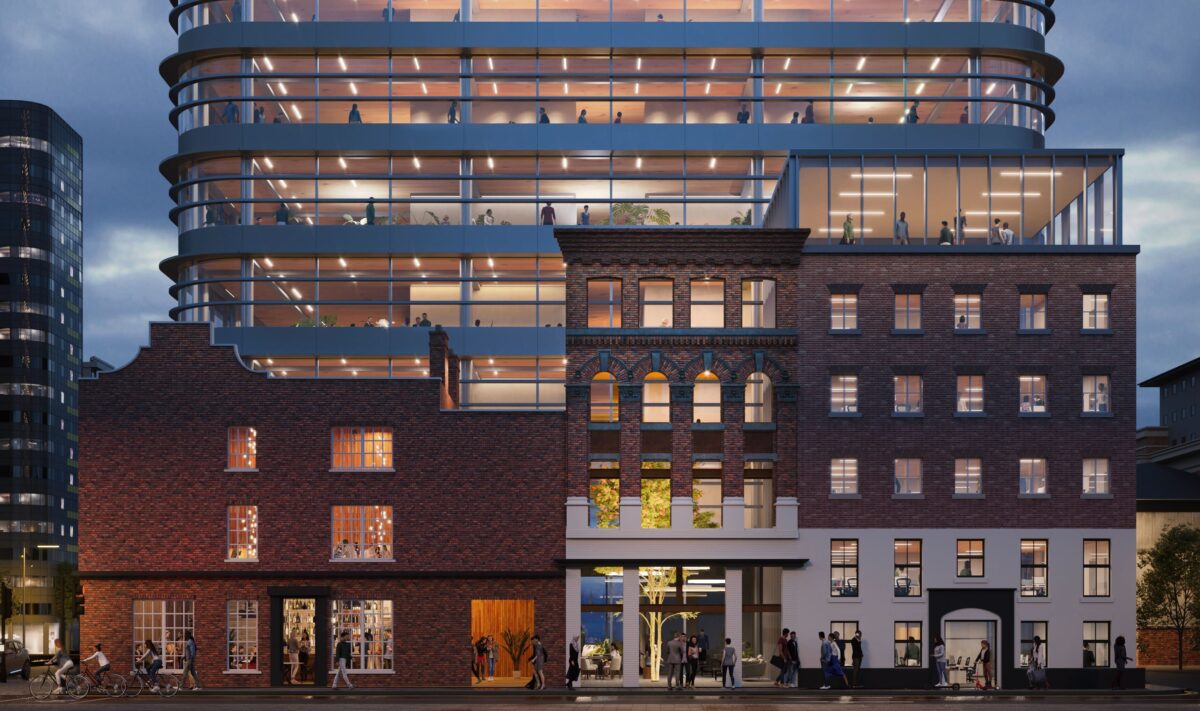 “This is a very complex site presenting many design challenges both from a heritage and massing point of view.

“It has been our priority to develop these plans sensitively and respectfully, ensuring that the end result provides a modern building which sits sympathetically within its surroundings.”

Members of the development team will be at the consultation event, which takes place on Wednesday 2nd November between 4pm and 7pm at Huckletree, The Express Building, 9 Great Ancoats Street. 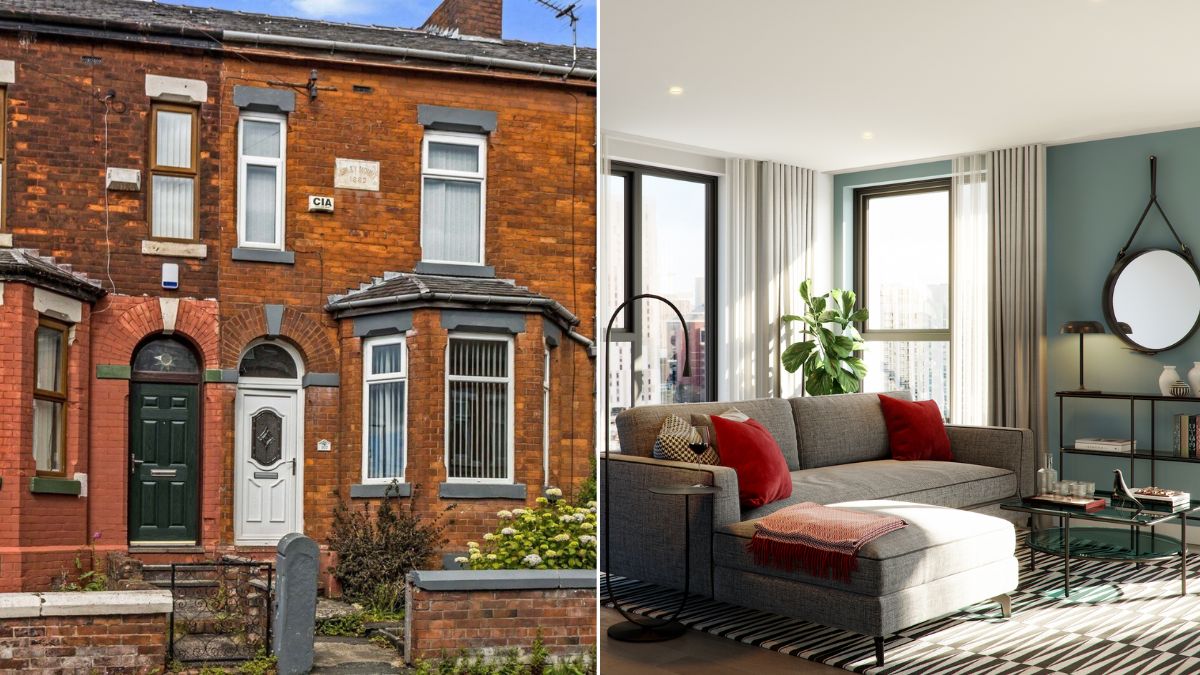 The Help to Buy: Equity Loan Scheme getting first-time buyers on the property ladder is coming to an end this October, potentially foiling the plans of thousands hoping to secure their first home this year.

The loan has proven to be a huge hit among those buying their first property over the last year, due to the fact they can purchase a house with a 5% deposit, rather than the traditional 10%.

The government then gives a 20% deposit contribution for the first five years, completely interest free.

Through the loan, homeowners have also been able to purchase their property at 75% loan to value, which eventually unlocks better mortgage product deals down the line. 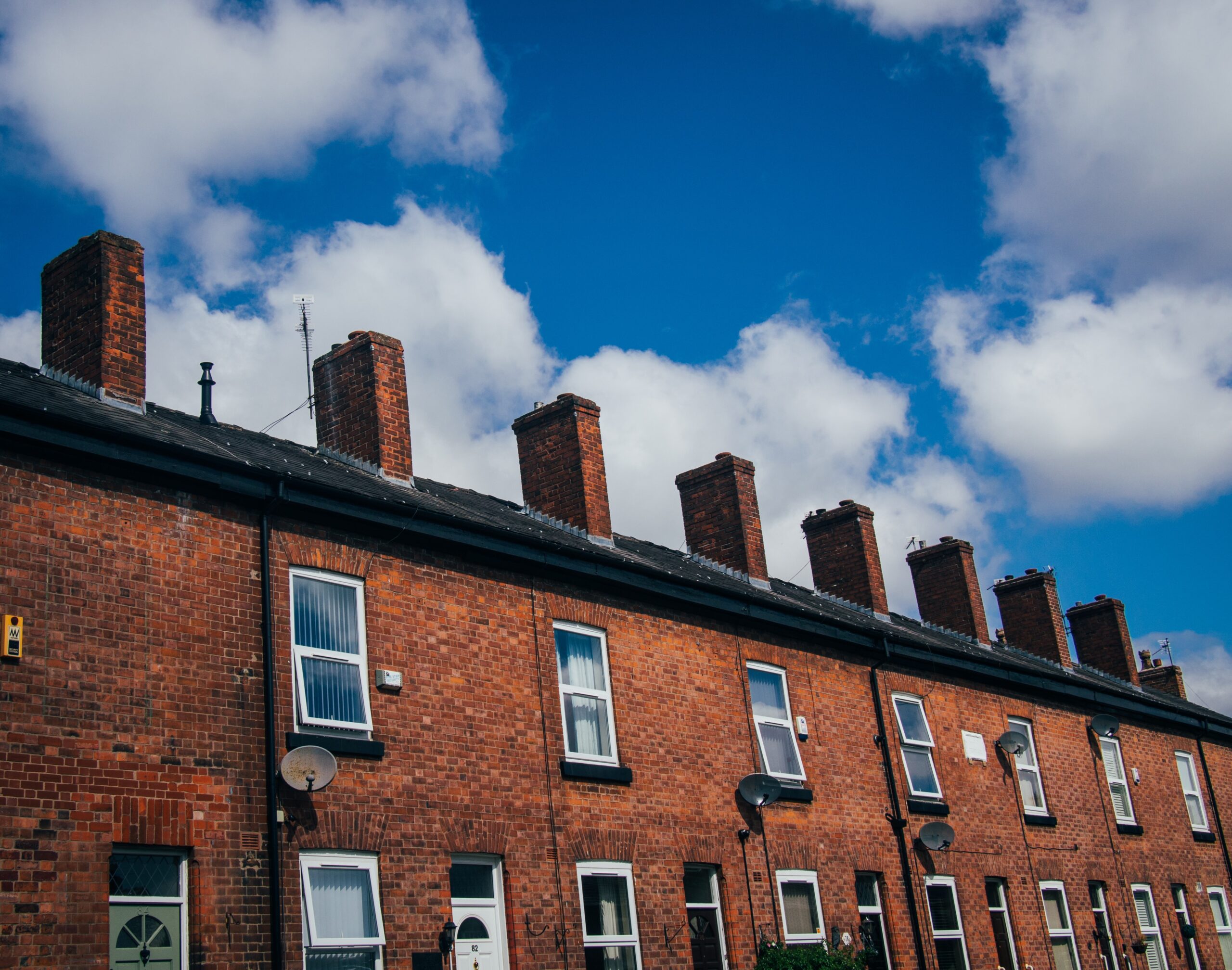 However, with the HTB scheme due to come to an end in March 2023, all new applications must be completed by October 31st this year.

Back in 2018, the government first announced that the Help to Buy: Equity Loan scheme would run from April 1st 2021 to March 31st 2023 and, according to the Gov.uk website, there are no plans to extend or replace it.

So as the deadline looms, prospective buyers here in Manchester are scrambling to get their finances in order and viewings booked in to take advantage of the scheme for one last time.

And one of the unlikely places accepting Help to Buy loans is HD Media City, which is allowing buyers – first-time and those already on the ladder – to snatch up its luxury apartments with a 5% deposit. 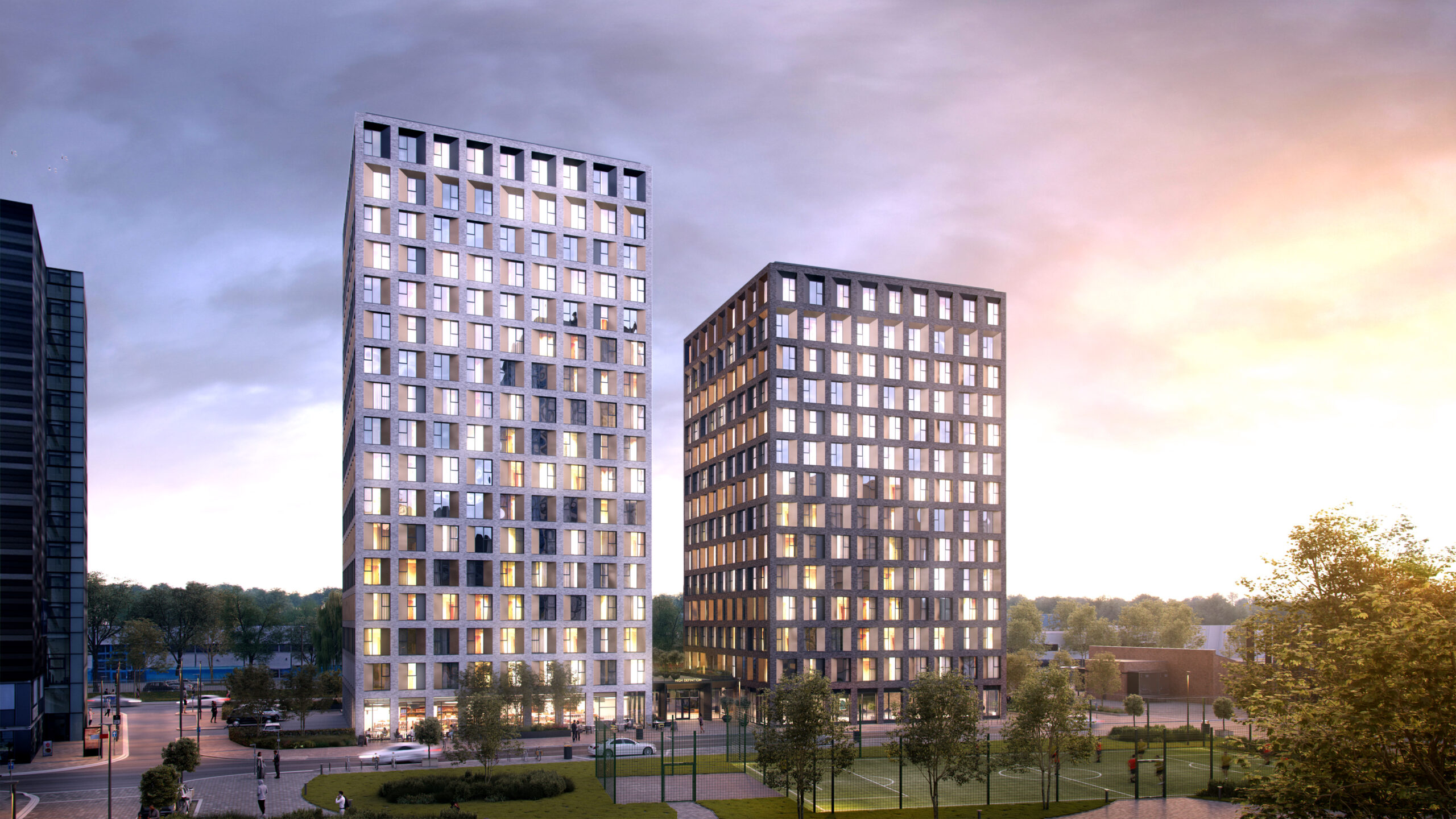 There are also 100 shared ownership units available, which is a good option for buyers wishing to purchase at a lower price point and with a smaller deposit.

But the Help to Buy scheme is the real star of the show for HD because, unlike similar flats in Manchester city centre, many of its one bedroom apartments fall below the HTB regional cap of £224k, allowing buyers to use the scheme to scoop up an apartment with only a 5% deposit.

Stephen Maskill, the regional sales manager at property developer Latimer, told Proper Manchester: “Almost all of the one bedroom apartments at High Definition fall under that regional cap, so it’s great that we can offer really nice luxury apartments with the Help to Buy scheme.

“It’s a very unique feature for this type of apartment to be available with that scheme. 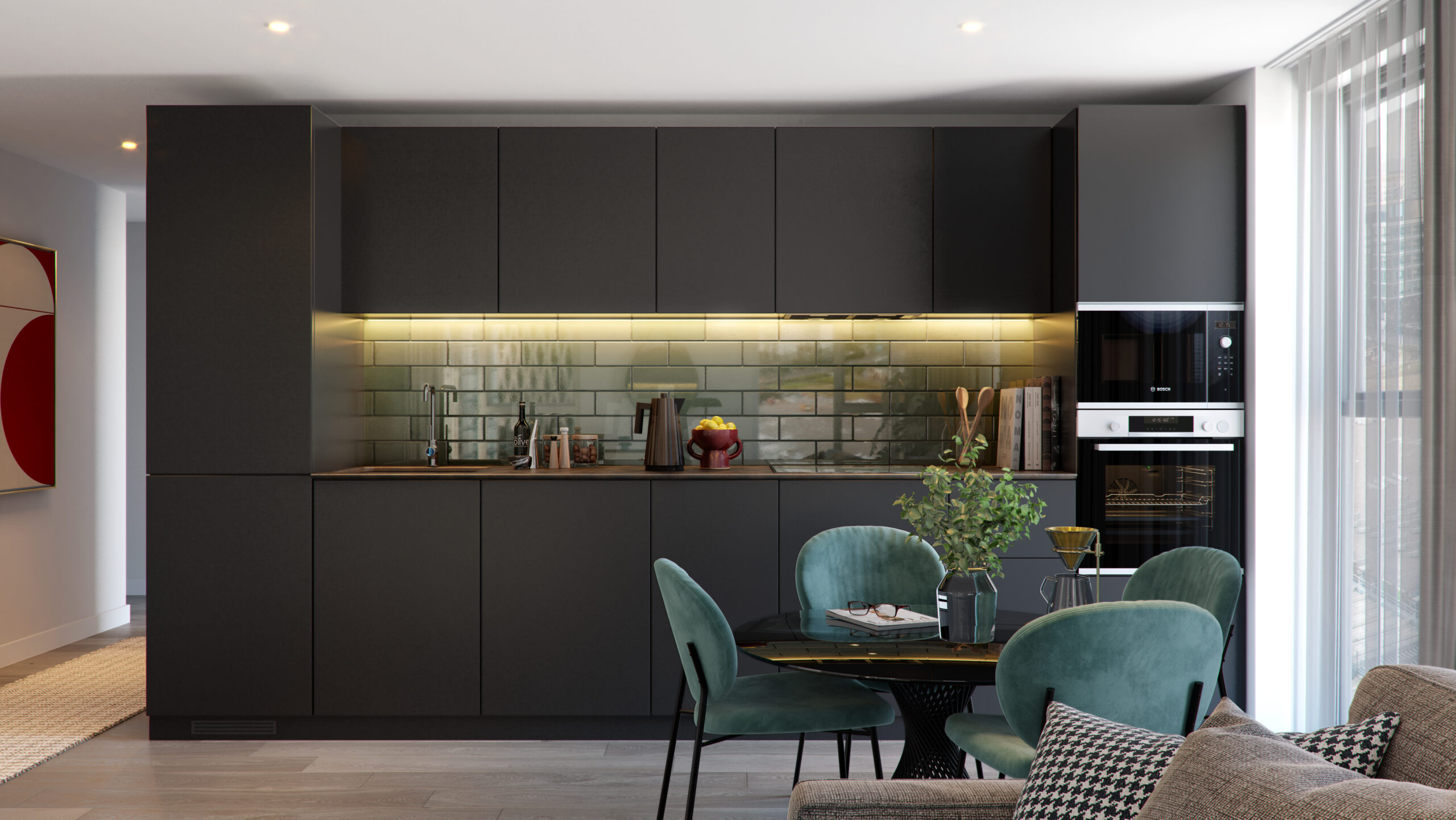 HD was born with a vision to create an affordable and community-led luxury living space in the heart of the exclusive Media City.

Stephen said that in the wake of the Covid pandemic, a strong sense of community was at the forefront of the vision when building and developing the apartments.

He explained: “After millions of people were stuck and isolated in their Homes during the Covid lockdowns, we really wanted to deliver a community-led space with co working and recreational facilities for all, as well as somewhere that encourages a healthy work-life balance for residents.” 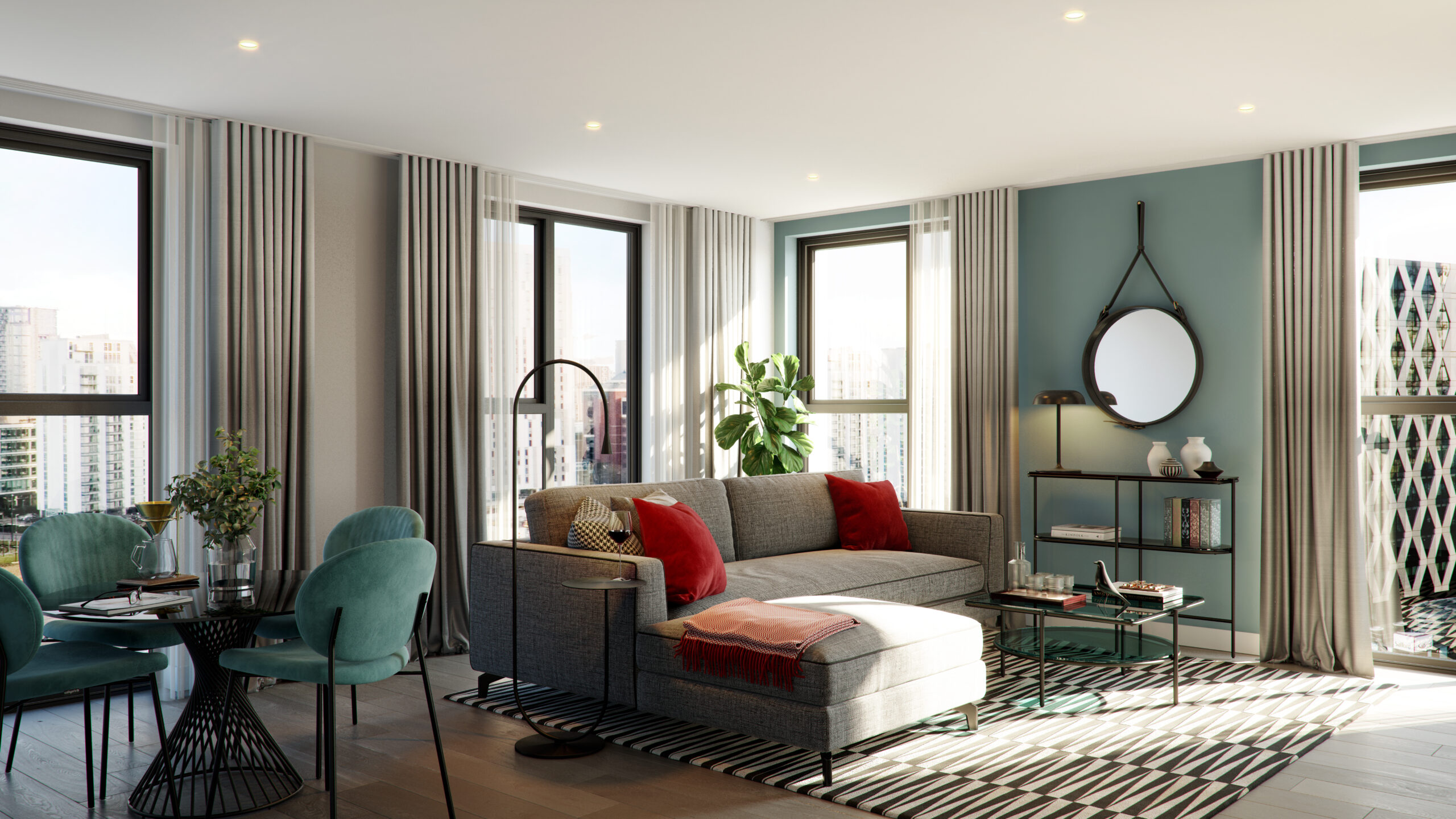 Energy efficiency was also a priority during development, with each apartment having the highest EPC ratings possible amid the cost of living crisis.

Stephen said: “The EPC ratings in these apartments are exceptional, which means utility bills and heating bills will be extremely low and affordable because of how insulated and efficient the building is.”

As for the location, Stephen says now is the perfect time to invest in a home in Media City, which offers the ‘perfect mix’ of city centre living and suburban tranquility thanks to its acres of green spaces and cultural attractions, as well as its selection of restaurants and bars.

He also says Media City is anticipating ‘tens of millions of pounds worth of investment’ in the next couple of years, giving buyers all the more reason to get moved in while it’s affordable. 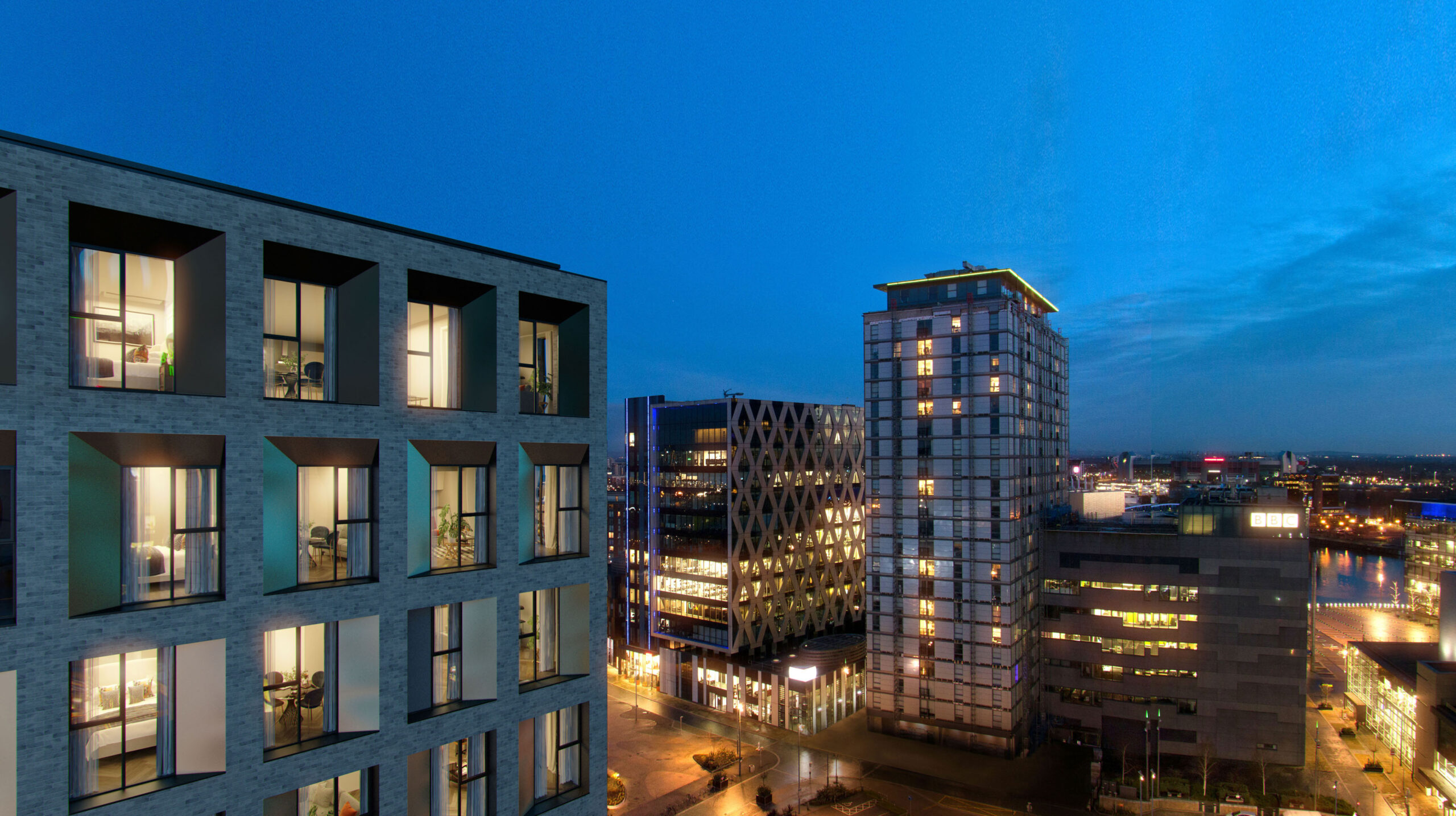 He explained: “Media City has had a lot of money pumped into it already, but there’s a huge amount of investment and development yet to come… It’s going to keep growing into a larger destination, and will become just like Manchester city centre by the time it’s finished.

“So buyers will be getting in at a good time where values and prices will be driven by the investment that’s coming into the area.”

And offering a bit of advice to first-time buyers hoping to secure their first home, Stephen said: “Buy now, and get yourself locked into a five year mortgage product deal. Future-proof what you’re going to be spending for the next five years on a mortgage.”

To find out more about HD Media City, the homes it has to offer and which payment plan will suit you best, visit the Latimer Homes website.